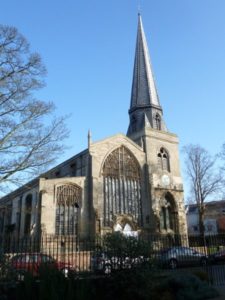 “Everyone should make a pilgrimage to the Somme Battlefield. The scale of human sacrifice on the first day of this battle is unsurpassed in British military history.”
Ruaraidh Adams-Cairns was brought up on the North East coast of Scotland. He was educated at Gordonstoun and Reading University, followed by the RMA Sandhurst. He joined the Queen’s Own Highlanders (Seaforth and Camerons). For the last 34 years he has worked for Savills, the international firm of Chartered Surveyors. In 2014 he assembled an essential pocket guide to 20 key places on the Battlefield supported by contemporary secret trench maps. Each place illustrates a different facet of this devastating battle and gives a vivid and moving insight into the stories of the extraordinary individuals who served there.

About the Pat Midgley Memorial Lectures

Pat sadly passed away in January 2013 but her legacy lives on in all the heritage sites she protected throughout her life. One of these was True’s Yard which she campaigned to save in the 1980’s and formed The North End Trust who run the Museum to this day. To celebrate her life and works the Museum started the Pat Midgley Memorial Lecture. The first was held in the Town Hall in 2014. The speaker was local Historian and Chairman of the North End Trust, Dr Paul Richards talking about Pat’s life. Then second in 2015 was about the tools of the fishermen by expert in his field, Des Pawson. This year marks the 25th Anniversary of the creation of the Museum and the centenary of the Battle of the Somme.