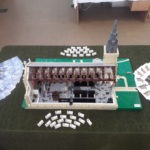 We  are pleased to finally unveil our latest exhibition. Thanks to our successful Silver Jubilee Appeal (1991-2016) we were able to comission a LEGO model of St Nicholas’ Chapel. The model has been built by Warren Elsmore Ltd in Edinburgh

The creator of the model, Warren Elsmore said: “We originally planned to build only the outside of the chapel. But when we saw the inside, we knew that we couldn’t leave it out. This made the design a lot trickier, as we had to recreate the entire interior, and leave out some structural walls so visitors could see inside.”

Our Deputy Manager, Rebecca Rees, added: “Lego is a classic children’s toy which appeals to all ages and St Nicholas’ Chapel is one of the town’s most iconic landmarks. We hope parents, grandparents and children alike will enjoy our model and maybe try and build their own in our Lego corner at True’s Yard.”

The model of St Nicholas’ Chapel will be on display at the Museum from Thursday, June 21 and will eventually be incorporated into the Museum’s permanent exhibition as part of a planned refurbishment of its exhibition gallery.