One of True’s Yard’s attractions is the cottages. There are only two remaining cottages, cottages 5 and 6, of the original six built in 1790. Cottages 1, 2, 3, and 4 were demolished in 1937 in the slum clearances.

Below shows a picture of cottages 5 and 6 before restoration, and once they have been restored. 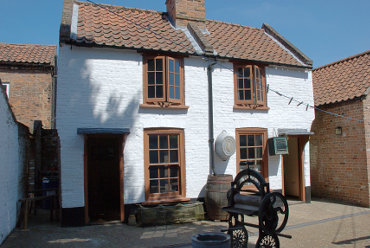 All six cottages once provided accommodation for large families, meaning families were often left very cramped in the cottages. It is recorded that nine people were living in cottage number 6 at one time. The only bed upstairs would sleep the six  children, with the baby sleeping in the chest, the mother would sleep on the floor with a curtain screening her from her children, and the father would sleep downstairs in the winter and on a fishing smack in the summer. Although the families lived in cramped living situations they had pride in their home and kept the cottages perfectly clean and never thought of them as slums.

It is recorded that from 1861 until 1911 all six cottages were fully occupied. However 1911 saw the decline in the fishing industry which meant many residents of the cottages were employed in trades other than fishing.

Visit True’s Yard Fisherfolk Museum to see and find out more about cottages number 5 and 6!