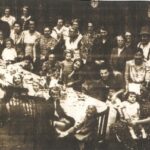 Today marks the 76th anniversary of VE Day. VE Day stands for Victory in Europe. This is the day in which Great Britain and The United Sates rejoiced in victory due to the defeat of the Nazis in World War II.

1 million Nazi soldiers tried to allude Russian forced by attempting a mass exodus in Czechoslovakia but were caught and detained by the Russians. The Russians took an estimated 2 million prisoners before and after the Germans surrendered. Whilst this was happening over 13,000 British prisoners of wars was released and sent back to Great Britain.

The German- Soviet confrontation continued into the next day and the soviets would lose another 600 soldiers in Silesia before the Germans finally surrendered. It was on 9th May that Stalin himself went on a radio broadcast and said “The age-long struggle of the Slav nations… has ended in victory. Your courage has defeated the Nazis. The war is over.”

Great Britain had suspicions that the Germans would surrender so it came as no surprise to the British people when the Germans did sign a peace treaty. Some people were already on standby to celebrate. Winston Churchill declared the 8th May 1945 a national holiday and various events such as parades and street parties were held. Winston Churchill also gained assurance from the Ministry of Food that there was enough beer supply in London to celebrate. Other ways for them to celebrate was the Board of Trade announced that people could purchase red, white and blue bunting without using their ration coupons.  Some restaurants decided to have a victory menu and some shops even sold commemorative items such as VE Day mugs.

The British royal family also partook in the celebration as they were waving on the balcony and had 8 appearances throughout the day on the balcony and there was once when Winston Churchill even joined them. During the last wave from the King and Queen, the two princesses were secretly mingling with the euphoric crowds below them. The future monarch Princess Elizabeth and her sister Margaret were allowed to leave the palace and anonymously take part in the party-like atmosphere and they reckon it was the best day of their lives.

Not everyone celebrated VE Day. For those who had lost their loved ones during the conflict of the war it was a time to reflect. During the time of the street parties and rejoicing, some people chose to mourn the death of a friend or relative, or worried about those who were still serving overseas. People like the recently widowed felt it was too much to bear and therefore didn’t partake in the celebrations around them. The United States tried to celebrate however the victory was restrained due to the recent death of President Roosevelt who led the country throughout the years of the war. His beneficiary Harry S. Truman, decided to dedicate the day to the late president and made an official order that flags be kept at half-mast as part of a 30-day mourning period (not all people decided to follow this as there were still many people celebrating. This is the reason as to why 15,000 police were assembled to control the huge crowds that had gotten together in Times Square, New York).